If you’ve ever been to Germany, you know that they understand how to do transit. While this has been well-documented, it’s always interesting seeing new takes on German transportation.

Last week, I came across two forms of media (old and new) that had commentary on urban transportation in Germany. The first was Kenneth Jackson’s thoroughly researched historical book on urbanism and suburbanism in the United States, “Crabgrass Frontier.” In a chapter about the advent of the streetcar/trolley, he comments on the dominance of the streetcar system across the U.S. compared with the rest of the world. One sentence stood out to me: “Berlin, which had the best system in Europe, would’ve ranked no higher than twenty-second in the United States.” This was in the 1890s. My have times changed.

Fast forward nearly 130 years from that streetcar data point, to today when I saw a Tweet thread about Germany from Houston-based planner Christof Spieler. He highlighted the efficiency of the Munich transit system and comparing it with several U.S. metropolitan areas.

Another one of the things the Germans do well in transit: commuter rail (or actually regional rail.) The Munich S-Bahn carries 800,000 passengers a day (that’s LIRR and New Jersey Transit combined) in a metro area of 2.6 million (roughly the same as Pittsburgh, a tenth of NYC). pic.twitter.com/yrLgteh7DA

I agreed with everything Spieler said in this thread and a follow-up thread. Since the turn of the 20th century, the U.S. transportation systems trickled downward in quality, while Germany’s, for all of its trials and tribulations, became one of the best in the world.

Both Jackson’s and Spieler’s prose made me think about riding Germany’s transportation and being in love with how easy it was to get around.

Traveling by Train in Germany and Its Cities

I traveled with my wife to Germany in 2011 and was immediately in awe of the regional and urban transportation systems. I knew they were good, as I did some research prior to the trip. But then riding the rails in person enhanced this perspective. The U-Bahn, the S-Bahn, the trams, and buses. Then also the high-speed trains.

I studied abroad in Europe and had been to a number of countries with fantastic transit service – almost like something inherent in European culture – so seeing such efficient transit was nothing new to me. But it was my first time in Europe in nine years, and my first time to Germany (and Switzerland via a two-day side trip, transversed all by public transit). What I think wowed me this time was the fact that I had been a working professional for a number of years who relied on public transit. That’s not to say Chicago had awful transit service, but how the German system was exponentially better.

Among the U-Bahn, S-Bahn, and regional trains we rode, I had the following observations.

This is all based on what I experienced. Of course, problems happen on rail lines and bus routes, but this system worked well. Trams, U-Bahn, S-Bahn, buses. Shared stations. Shared networks. All built into centuries-old cities.

In Munich, the capital of German beer, we took a brewery tour to multiple venues, including Paulaner, Schneider Weiss, and Hofbrau. And we did all via the underground trains.  Meet at Marienplatz, take U-Bahn to one brewery, then take U-Bahn to the next brewery, and the next. This is something you would probably never see in the U.S., where the mode of transport on such a tour would be a party bus, or at least taxis or TNCs; if a train were how you got to the breweries, that would no doubt be disclosed as part of the tour–“Ride the train to the breweries”–to give those transit-averse folks in the U.S. a heads-up.  But in Munich, with how efficient the system was, taking the U-Bahn was a given.

Something that caught me by surprise was seeing a guy haul a surfboard on the U-Bahn. It just seemed out of place. Sure enough, the next day as we walked the city, we saw a large crowd of onlookers, and a large group of people in wetsuits, surfing on the artificial rapids at the Eisbachwelle. Quite a sight to see in November, in Munich, a landlocked city near the mountains. 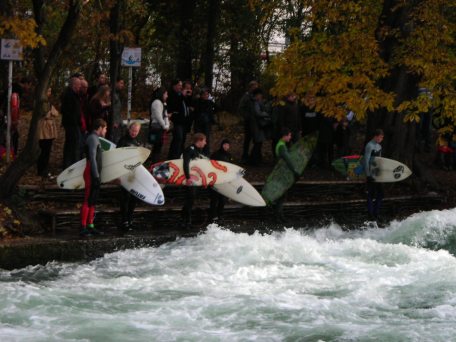 Surfing on the Eisbach 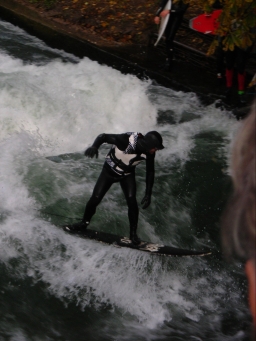 Surfing on the Eisbach

Outside of Munich, we traveled by rail to Switzerland, where we rode a classic cog railway up Mount Rigi near Lucerne. We then went to small towns in Germany. A country renowned for its high-performance cars and highway system, doesn’t skimp at all on rail. The ultimate driving machine is rooted in Germany! Yet, that automotive pride doesn’t supplant social, financial, and political investment in rail transport. (I only know that BMW brands itself this due to the bevy of commercials I’ve seen over the years, but that discussion is for another time.)

We rode trains from Munich to Zurich. Zurich to Lucern. Lucern to Basel. Basel to Frankfurt. Frankfurt to Wurzburg. Wurzburg to Steinach to Rothenburg (and back). Wurzburg to Bamberg. Bamberg to Berlin.  Indeed there were transfers. But we never had to wait for more than 30 minutes, whether it was an evening train, a weekend train, or a midday train. And again, the rolling stock was top of the line. Even the second class coaches would exceed first class on U.S. rail lines.

Like Munich, Berlin had an equally robust and connected network of U-Bahn, S-Bahn and bus routes. The tram system is mainly in the former East Berlin, but was still efficient, as were the bus routes (all-door boarding!) that replaced the trams in former West Berlin–either midday, late afternoon, or even 5 a.m. to get to the airport. As an entire city network, the U-Bahn and S-Bahn went everywhere and were incredibly efficient, even for a Sunday night.

As my wife and I rode an S-Bahn train after being in Berlin for a couple of days, I rhetorically said to her, “Does a city need to be completely destroyed to have good transit? Bomb the old structures to build a new system?” She didn’t like me saying that, and it’s certainly not true. But it’s astounding: Within just 80 years, Berlin was blown up, rebuilt, blown up again, divided, rebuilt by four different governments, and reunified, yet it had one of the best urban transit systems I’ve ever seen, with its rail systems surviving all of the hardships.

The U.S. has tons of wealth. At over $19 trillion, the U.S. has the highest gross domestic product in the world; Germany is third globally, but its GDP is only $3.6 trillion. But somehow Germany’s transportation is far superior to that of the U.S. What my wife and I saw in person is only a sliver of how the rest of the country operates, but I’ve heard similar positive remarks about transit from people who’ve visited Frankfurt, Cologne, and Dusseldorf.

The German model is something that every city, state, province, and country, should strive for. Many already have. The U.S. needs to catch up.